how does your garden grow?

In days of yore (pre-covid) Anthony Roberts (Director of Colchester Arts Centre) gave me a bell out of the blue to enquire if I could help him with an arts project. He wanted to somehow explore the community of animals and plants that might inhabit the graveyard of the Arts Centre … I should add the Arts Centre was formerly St. Mary’s Church - hence the project title.

I presumed Anthony came to me as he knew of my boffin type knowledge in these matters. I churned it over in my mind and came up with a proposal. Briefly, I would be in residence in the graveyard and document everything that lived there - right down to microorganisms that lived in the soil - and produce a film from the documentation, a kind of Springwatch meets Samuel Beckett’s inner monologues. We planned other events together in our minds, including discussions during dinner events with members of the local community involved in conservation and a screening night at the arts centre, which I would curate with other artists who were working with similar themes.

Along came Covid. I couldn’t travel. I contracted Covid and still suffer from long covid and, one plus year on, travelling was made even more impossible. The clock was ticking for the project's deadline - so I came up with a new plan.

The new project would play with fact and fiction, be absurd and fantastical yet have serious and dark undertones. I would be able to stay cocooned at home and imagine the plants, mammals, fungi, etc. that might live in the graveyard and show, through writing and illustration, how they had changed or evolved because of humanity’s effect on their environment.
​
I’ve worked across many art forms and I spent most of my childhood and teenage years obsessively drawing. I thought this might be the perfect medium for my side of the project. A fairy tale that might come true. Anthony was surprised and didn’t realise I did works on paper. I stopped drawing and painting over 25 years ago. I stopped because I could no longer say anything through the medium and found new ways to express myself. I began very nervously and, in little time, started to get excited again by art materials.

A part of the new project would be in collaboration with Anthony who would take on a more factual and investigative approach by interviewing people to gather stories from those within the local community involved, either professionally or not, in conservation, or from those with environmental concerns, all of whom would not normally be involved in an art project. They, in turn, might show Anthony how best the community that uses the Arts Centre could share its outside space with plants and animals.

Anthony and I commissioned a talented, young, local photographer, Jordan Shults, for his interpretation of the graveyard in order that people could see the catalyst for the project and maybe themselves imagine what might live there, unseen by humans.
Things I have learnt from this project:

While wanting to know how Hedgehogs copulate, presuming the spines posed a problem, I had to witness actual nocturnal footage of a pair of prickly lovers getting into the correct position (even if it was just to produce two fluorescent blobs in the background of my hedgehog drawing). It was, however, quite fascinating. I have also learnt they are highly promiscuous so and sos.

Drawing is neither old fashioned nor dead - something can be said equally as well on paper as any fashionable, modern medium.

The world's finest pen, a Copic Multiliner SP 0.03, is unsurprisingly made in Japan.

They still produce pickled onion Monster Munch crisps.
I have more fantastical creations in my head and in the future I’ll get these down on paper. I hope you will enjoy this website … if you don’t I hope we might leave you with a few things to mull over in your mind and, at the very least, maybe you could google how Hedgehogs copulate.

Mary Mary Quite Contrary is a commission by Here and Now, a national and local celebration of culture within communities, comprising 40 new projects that took place in and around 40 arts centres across the country, led by artists and co-created with local people. Each project tells the story of the place and the people, and shows the impact of the National Lottery on community life and arts, celebrating its 25th birthday.

Part One
Tales for the Modern Reader
Lisa Wesley's illustrated tales of the imaginary flora and fauna living within the graveyard of St. Mary's Church.
Part Two
Through the eyes of Jordan Shults
The graveyard through the lens of photographer Jordan Shults.
Part Three
Dr. Anthony Roberts Investigates
Anthony Roberts, Director of Colchester Arts Centre, meets local experts and enthusiasts to discover the plants, insects and mammals living within the graveyard of St. Mary's Church and discusses strategies to encourage more wildlife back in.

Lisa is a multidisciplinary artist and writer, whose work ranges from performance to installation, collage to video, photography to epic, durational model making.

Themes and issues contained in her work concern living in contemporary Britain, the blurring of the line between reality and fantasy, the ironic play between fact and fiction and the inversion of ‘lowbrow’ into ‘highbrow’ culture. She creates work by combining fragmentary layers, autobiography, witnessed events or second-hand information together with found objects.

In 2010, she made the decision to stop making art and focus on building a specialist plant and seed nursery (Growild Nursery). Along with her partner, she has also created a wildlife haven at their nursery, including a 5 acre wildflower meadow on what was once over-grazed farmland. In Mary, Mary, Quite Contrary, she returns to art to combine her love of nature with themes she has previously explored.
Jordan Shults

Jordan Shults enjoyed Maths, Computer Studies and Gaming at Colchester Academy where he studied with the support of dedicated LSAs throughout his education. In year ten, he had the option to do photography as an additional subject and he was happy at the thought that no one could say your images were wrong if it was your idea.

It was an option that saw him become more creative with an enthusiasm for the subject and he carried on to Colne College, Brightlingsea to study A level.

In 2015, a macro image of his work was on display at Firstsite Open Exhibition, which encouraged him to pursue his studies and he completed an A level in 2017.

He studied Gaming and Media at Colchester Institute for one year and left education in 2018 as he wanted to pursue his photography dream as JShu.

2019 was an exciting year. JShu tee shirts became a reality in a variety of colours, including his favourite orange, which he wore at the first ever Autism Awareness event held by Colchester Council at Moot Hall on 2nd April.

And in March, three pieces of his work were unveiled at the Henry Normal Autism Awareness event to much applause at Colchester Arts Centre.

In July, he was a finalist of Colchester Youth Award. His confidence grew when his JShu Photography Facebook page was set up for him and he gained followers around the world.

2020 came and went and, due to isolation, he carried on with Cloudscapes from home without complaint and looked forward to getting out and about again doing his photo shoots at Colchester Castle Park and Manningtree.

In 2021, he was sponsored by Colchester Council for the Autism Awareness virtual event organised by Anthony Roberts of Colchester Arts Centre, who dedicated a poem to him on 2nd April with a link to JShu Photography for people to follow.

A man of few words, Jordan is proud to be involved with this project, which is his first commission.
Jordan Shults on Facebook
Dr. Anthony Roberts
​Director, Colchester Arts Centre
​
Anthony graduated from Bristol University with a degree in English and Drama in 1982. His first job after graduating was as a car park attendant for Watford Borough Council. His first job in the arts industry was as a press officer at the Old Bull Arts Centre in Barnet, North London.

He went on to work as a marketing officer at Salisbury Arts Centre, before being appointed director of Colchester Arts Centre in 1991.

He is currently chair of Frozen Light Theatre Company, and also acts as a trustee for performance artist Bobby Baker. He also serves on the advisory boards for Marissa Carnesky and Hunt & Darton.

He acts as the UK producer for the New York based Reverend Billy and the Church of Stop Shopping and producer for Miss High Leg Kick.
​
For 14 years he led the talent development initiative Escalator East to Edinburgh which brought East Anglian talent to the Fringe and championed access for artists and audiences with disabilities. 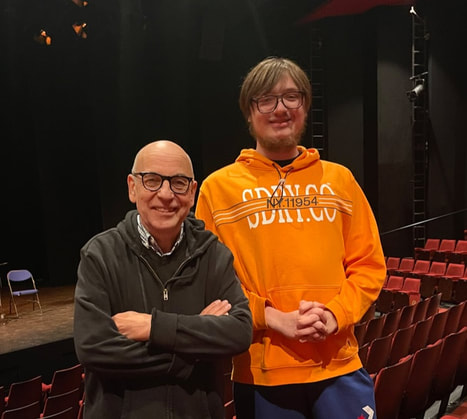