tales for the modern reader by lisa wesley

A tale of evolution gone pear-shaped …

Erinaceus europaeus fluorescens, The Hi-Viz Hedgehog, is a variety of the European Hedgehog that has evolved a glow-in-the-dark fluorescence so it appears clearly conspicuous when crossing murderous roads. The Hi-Viz Hedgehog’s night-time luminescence beyond doubt saved its bacon from motorists, allowing them ample time (if they were not too distracted by their phone) to hit the brakes, or swerve, so it didn’t end up as a sad, spiky pancake with a trail of squishy internal organs for scavenging buzzards and members of the crow family to pick at and argue over.

Millennials flocked to see this futuristic, buzzworthy ‘experience creature’ and, instead of going down the pub and getting rat arsed as was the time-honoured tradition at a weekend, they sat in their cars in lay-bys with flasks and sandwiches and witnessed this other-worldly, nocturnal event - a bit like watching ‘awesome’ fireflies but a thousand times the firefly’s circumference obvs. “How cute is that!” the Millennials exclaimed at Mother Hi-Viz Hedgepig and her Hi-Viz hoglets who followed obediently behind in an adorbs, orderly line. Yet the “so sick!” climax of the evening was to ogle a pair of fluorescent blobs getting-down-and-dirty and to upload the wobbly, zoomed-in footage online with a running commentary, like “go on my son”, etc … 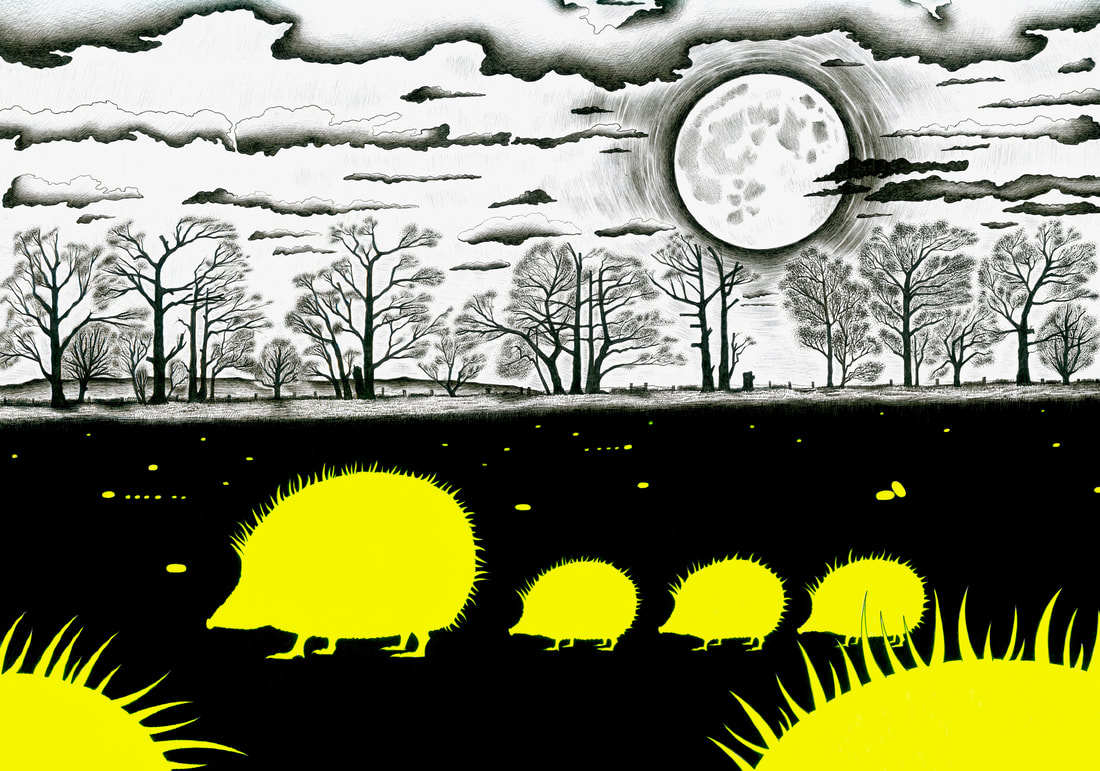 Nevertheless, the Hi-Viz Hedgehogs stuck out like an inflamed thumb, becoming sitting ducks in the newly invented sport of Hi-Viz Hedgehog baiting*, and a fresh target for Nincompoops that trespassed on farmer’s fields under cover of the night, kitted head to toe in army surplus, camouflage gear to execute anything that drew breath. The hogs’ resplendence was snuffed out, bang by bang, like candles at the end of a dinner party.

Even with all these acts of inhumanity to the enchanting ‘experience creatures’, the population numbers were insanely out of control - according to the pea-brained government, who issued a cull, handsomely paying landowners and nincompoops in army surplus, camouflage gear ten quid a hog hide. The cack-handed government had come up with a half-baked theory (even though there was no scientific evidence) that this variety of hedgehog was unequivocally the new culprit spreading tuberculosis in cattle. All the badgers had been culled yet Bovine Tuberculosis was still rife, so the ham-fisted government simply needed another scapegoat to appease the cattle farmers.

If you are vigilant and lucky, the chances are you might still see a lone, luminescent blob under the moon, snuffling through the coal-black night for worms, beetles and slugs … hopelessly seeking a mate.

The Weed that Turned Blue

The Mistletoe and Wine Bat